Please spend just over six minutes watching this video by Paul Barnett of wellredfilms to see for yourself just how magnificent the people of Tamworth are.

From Syria to Tamworth from wellredfilms on Vimeo.

Wow! Fantastic turnout today in Tamworth Castle Grounds for the ‘Tamworth Says Yes to Syrian Refugees’ demonstration – to counterpoint the naysayers. Well done to the organisers for such a great event and thanks to Staffordshire Police for their presence.

Here’s some pictures from the event. Click an image to enlarge it. (All images courtesy of RobTheRunt) 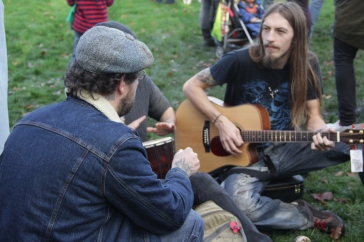 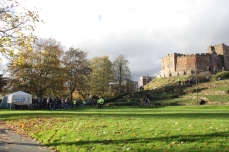 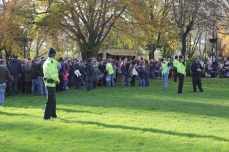 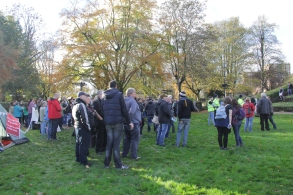 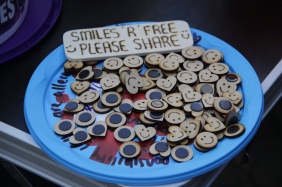 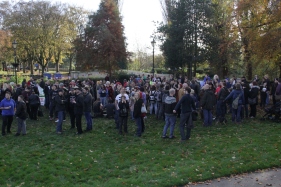 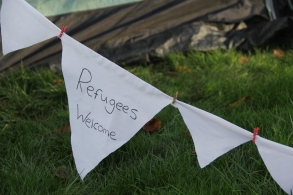 A statement from Tamworth Green Party.

Tamworth Borough Council is to be applauded for its decision to take in ten families fleeing war and persecution in Syria. Whilst this does not go nearly far enough, it is certainly a step in the right direction.

However, for some, even ten families is too much. They argue that Tamworth is ‘full’ and we cannot adequately house our own people.

Whilst it is true we face an acute shortage of suitable accommodation, there is no contradiction between continuing to campaign for decent, affordable homes for all and stepping up to meet our obligations to do the right thing and support the Syrian refugees.

On that basis, we would urge people to show the caring, tolerant and compassionate face of Tamworth and bring family and friends to join the “Tamworth says YES to refugees” gathering in Castle Grounds, at 2pm on the 7th November.

Let’s all stand up and be counted.

War On Want are planning creative action outside an arms factory in Shenstone as a part of their #StopArmingIsrael campaign. You can register your interest in participating in this.

Here’s the details from War On Want.

Will you join us on 6 July for a day of creative action outside the Elbit Systems arms factory in Shenstone (near Birmingham) as a part of our #StopArmingIsrael campaign?

RSVP now to register your interest and get updates about the action (including possible transport options)!

The beginning of July marks one year since the horrific Israeli attacks on Gaza last summer, which killed over 2,000 Palestinians. These attacks are enabled by the UK government’s support of the Israeli military industry. In 2014 alone, the UK government licensed over £11.6 million worth of military equipment and arms components for export to Israel, with full knowledge of what those arms are used for.

Help War on Want by donating to our Stop Arming Israel campaign.

Also in July we are marking BDS@10, the ten year anniversary of the inspiring grassroots call from Palestinians for international supporters to engage in campaigns of boycott, divestment and sanctions (BDS) on Israel until it complies with international law to end its apartheid policies. Central to the BDS mission is targetting the arms companies profiting from Israel’s war against Palestinians, producing weapons and weapons components used in the Israeli military attacks. Many of these companies are operating right here in our communities in the UK.Protesters call for an arms embargo and for the UK to stop arming Israel.

Elbit Systems, with its subsidiary factory in Shenstone, is one of Israel’s largest arms companies, producing drones and other military technology used in Israeli military assaults on Gaza. Last year activists occupied the factory, forcing its operations to grind to a halt while they were there. Now it’s time to go back outside the same factory, this time in numbers, to transform it into a space for community.

The Stop Arming Israel campaign will be a long-term campaign with many different approaches, including pressuring our government and the arms companies themselves. For now, let’s send a powerful message to Elbit Systems that we will not stand by while they produce their deadly weapons!

The Anti-Austerity March that took place in London on Saturday 20th June (organised by The People’s Assembly) was hugely well attended.

The expected 65,000 protesters was more than achieved with an estimated 250,000 turnout.

The Green Party had fantastic representation with party leader Natalie Bennett and MP Caroline Lucas both in attendance.

A few members of Tamworth Greens also made the trip and have provided some photos of the day. 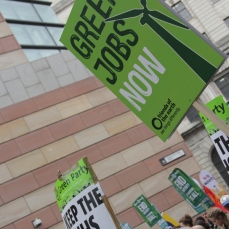 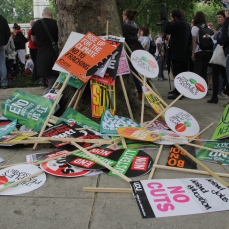 Further information on the day can be found via the the following links:

News from the court in Brighton where five Balcombe anti-fracking protestors including Caroline Lucas MP are on trial.

And the verdict is… NOT GUILTY!

This is fantastic news.

But as Caroline Lucas said this afternoon from outside the court in Brighton:

“We are pleased that the court upheld our right to peacefully protest against fracking, but this judgement is not a victory. We will continue to campaign to end fracking and celebrate when that has been achieved.”

In the light of the UN’s latest report on climate change, it is clearer than ever that the only safe and responsible thing to do with shale gas is to leave it in the ground.

“All five of us would like to thank everyone who has turned up to support us and thank the thousands of people who have sent letters, emails and tweets to express their support.”

Caroline’s full reaction to the not-guilty verdict can be found here.

The latest opinion polls show that Britons favour onshore wind over fracking by three to one, so the fight for a safe climate and a frack-free future is looking hopeful, but we’ll all need to play our part.

This year has seen the passing of an awesome milestone in the accelerating escalation of the climate crisis – the record shattering disapearance summertime arctic sea ice, which has now been predicted to disappear completely by 2015 (see further here and here).

Something that was not predicted to happen till the end of the century is happening right now! But not only is climate change already altering the planet’s basic geography, the rapid changes in the arctic  have been linked to recent extreme weather events that have destroyed crops and sent food prices spiraling, hitting the world’s poorest hardest.

Yet even as the world is poised on the brink of a tragedy of unimaginable scale, none of our leaders seems to be so much as blinking an eyelid in response. Worse than that humanity is engaged in a madcap suicidal dash to unearth  yet more of what caused the problem in the first place – fossil fuels.

Even as some fossil fuels are becoming more expensive to extract, new types of – often more carbon intensive – fossil fuel are being discovered and exploited. We believe it’s time to “get fracktious“about the criminal insanity of the way we are responding to probably the biggest threat humanity has ever faced.

We will be acting in solidarity with the many local campaigns around the country in resisting the expansion into this country of the risky and destructive pratcice of ‘hydraulic fracturing’ or “fracking” for previously un-tappable “shale gas”. This is a major prop for George Osborne’s new “dash for gas” which threatens to expand the exploitation of this fossil fuel in a way that would effectively blow the (inadequate but hard fought for) Climate Act out of the water (see here).

To this end we will be building our own “fracking rig” outside Parliament to secure a definitive photo-op and to signal to government that fracking will not go ahead without massive resistance. See spoof about this here.

e will also be building a “Grosvenor Square Keystone pipeline” (see here) between the Canadian High Commission and the US embassy to signal our outrage at the continued exploitation of high-carbon tar sands.

We will also be demanding that President Obama end his “Climate silence”, speak out and spend some of his re-election political capital on action against climate change.

1:00 – 1:30: lay the “Grosvenor Keystone pipeline”, Speeches on the Arctic and Obama’s Climate Silence and on Tar Sands by Jess Worth from the Tar Sands Network.

If you would like to help us by stewarding, please email us at stewards@campaigncc.org. We will have a prop-making day on Saturday 17th November at Grow Heathrow from 10:00 am (this may continue on the Sunday 18th.) See more here. Just turn up or email us in advance at info@campaigncc.org if you’d like to help us with this or prop-making and logistical preparations in general.

Tamworth Greens will be joining the TUC demonstration “For a Future the Works” on 20th October.

The message we want to put across is simple. The current economic crisis gives us a golden opportunity to start to build a new society based on justice, fairness and sustainability, operating not in the interests of the bankers, who brought us to the brink of ruin, but in the interests of ordinary people.

Government should institute a crash programme of investment in green and sustainable jobs. It should renovate the whole of Britain’s housing stock, to bring it up to the best standards of energy efficiency, and start to build millions more high quality social housing.

Hundreds of thousands of young and unemployed people should be trained, equipped with the necessary skills to carry this out.

Furthermore, there should be a massive expansion of cheap, high quality public transport and a rapid shift away from fossil fuels towards renewable forms of energy production.

Workers in polluting, wasteful or socially less desirable industries should be re-trained and re-skilled- putting their expertise at the service of a cleaner, fairer, low-carbon society.

We need to do it and we should do it now.

We will be travelling to London by train- drop us a line if you would like to arrange to meet up with us.

Pictured below – Eddie and Simon from Tamworth with Mark from Bromsgrove. 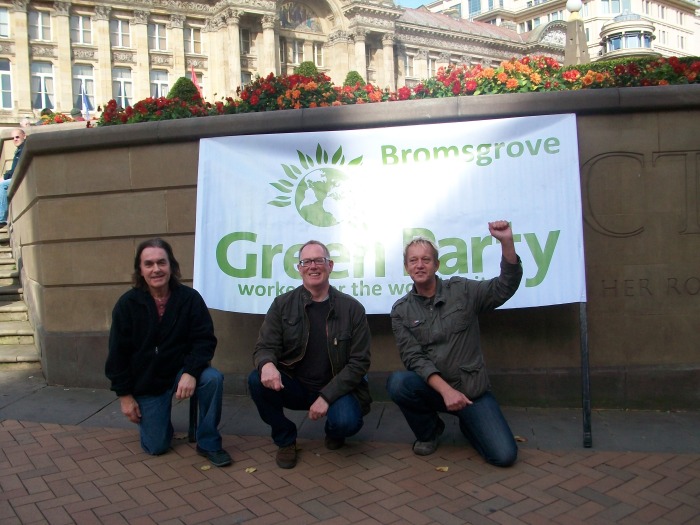 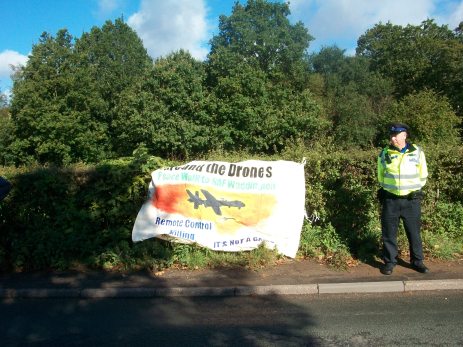 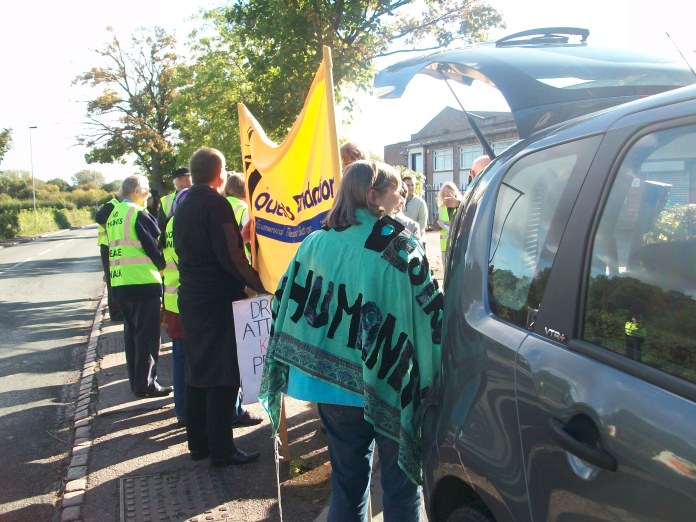